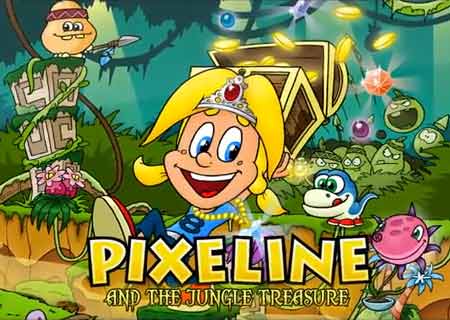 Mobile games have gained a lot of popularity with the advent of smartphones, as they now proffer and enticing and immersive way of spending the commuting time. A new title is currently making its way to the App Store for iPhone users. Dubbed Pixeline and the Jungle Treasure, this game has been developed and published by Progressive Media and osao, respectively.

This amusing fun filled 2D side-scroller is full of dangers with giant spikes, evil fur balls and angry plants. Moreover, gamers will have to be careful and watch their step as there are floating platforms, watery graves, slippery surfaces, crumbling ceilings and deadly pits. The surreal game has an adorable heroine named Pixeline, who is out on a quest to find the covert ancient treasure hidden within the dark and treacherous jungle.

“We’ve worked hard on Pixeline and the Jungle Treasure. The game is both a new entry in the classic side-scrolling genre as well as a game that was designed with the iPhone in mind. You’ll love the challenges, quirky characters, and the welcoming story line that is absolutely enjoyable to play. This is an instant classic that belongs alongside the best of the side-scrollers and we’re proud to bring it to gamers worldwide,” stated Thomas Nielsen, CEO of Progressive Media.

iPhone owners have to assist Pixeline as she finds her way through the perilous jungle searching for treasure chests, gold coins, and uncovering the mystery of the shape shifting animal spirits. With twenty-three levels and five unique worlds, the game features four different character types each showing off its own special abilities. It unfolds a very intelligent and challenging adventure with vivacious artistic design and a catchy soundtrack. The game flaunts easy and intuitive controls as well as the ability to transform into various animals, each with its own traits and abilities.

Pixeline and the Jungle Treasure is anticipated to hit the App Store by the beginning of December, 2010. What’s more, Android, J2ME, Windows Phone 7, PC, Mac and WiiWare variants are said to release, come 2011.