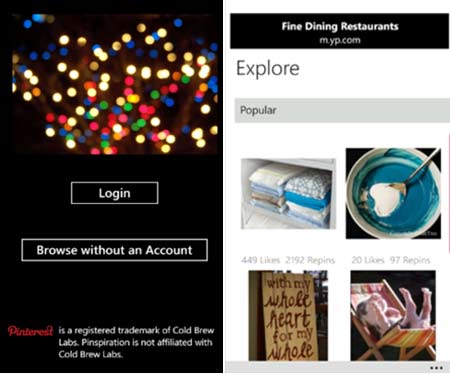 For internet users who have grown used to pinning and repining on each other’s pages can now do so via their Mango handsets too, with the new Pinspiration application. The app brings the benefits of the website called Pinterest on smartphones running the Windows Phone 7.5 OS or higher.

The website lets users create accounts and express themselves through this network by using images. Uploaded or pinned pictures can be categorized into various predefined sections, which also make it easier for other pinners to find, view or repin them. Once the app is installed, aspiring new members will need to send an invite.

“This social network has so much potential. It works simply as a set of personal picture albums, which display better than Facebook. Or it works as a message or memo board, to bring new websites or information to the attention of your followers. As a viral way of spreading images, it seems hard to beat. And it works well as a kind of plug in to Twitter and Facebook,” says a recent post on the official Nokia Conversations blog. 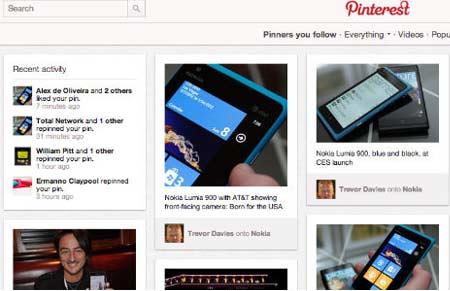 After the invite is processed, members can set up their account and start pinning alluring pictures. Uploaded images need not be shared. Privacy settings allow users to keep their photos private or show them off to the Pinterest world. Once logged into the mobile phone app, users can click in-app images or use existing ones from the media gallery.

The Pinspiration application for Windows Phone 7.5 OS and higher can be downloaded free of cost from the Windows Marketplace. The Pro version for the same, which allows uploading numerous images at once, can be grabbed for 0.79p.