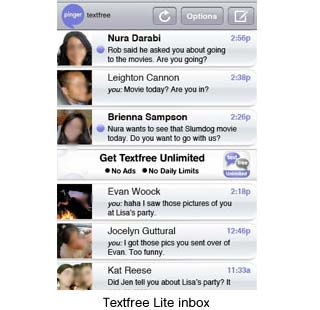 Voice call and texting go free, with an all new Textfree version. Pinger has unraveled the latest Textfree with Voice said to be the first applications based communication suite for smartphones, offering free phone numbers for messaging and calling purposes.

The existing Textfree, version 3.4 claims to be one of the primary texting applications at the iTunes app store. However, the service offers more, by giving free voice services over 3G and Wi-Fi. Textfree with Voice is all set to change the conventional fee structure scenario by monetizing messaging and calling with advertising.

Pinger asserts the importance of Textfree with Voice by saying that every year mobile network companies charge their consumers with hundreds of dollars for only messaging plans. Individuals sometimes pay up to $240 a year for unlimited messaging plans, whereas family messaging plans could go up to around $360 per year.

“Smartphones are rapidly becoming the norm for mobile consumers, but they are tied to an antiquated billing framework,” comments Greg Woock, Pinger CEO and co-founder. “Our ultimate goal is to offer free calling and texting to the four billion mobile phone subscribers worldwide.”