The concept is behind the PhotoMath app which solves math equations for you, is great even though it doesn’t appear to be doing the job as promised. Before we get to that, the application obviously needs a quick introduction. Imagine aiming your iPhone’s camera at a math problem and having it give you the answer after analyzing the data.

That’s right, you simply have to point your snapper at the expression in question, sit back and let PhotoMath do the work. Described as the ‘world’s first camera calculator,’ it also offers users a step-by-step visual guide to explain how the equation was solved. There’s one pronounced downside to the app though – it can only understand printed text and can’t handle your handwriting, no matter how neat your penmanship is. 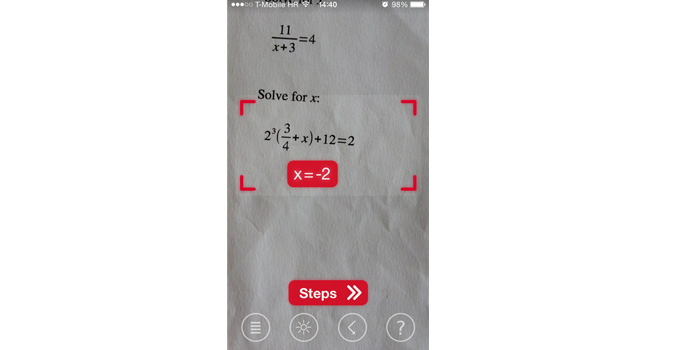 The developers behind PhotoMath claim that it can deal with basic arithmetic, decimal numbers, fractions, linear equations, logarithms and so on. More complex calculations are likely to be supported via future updates to the app. The user reviews for it are not very encouraging, at the same time. It appears that the tool’s capability to see through to the print on the other side of thin pages interferes with it.

Another user thinks the application is quite limited by its inability to do greatest common factor, grouping and inequalities, for starters. But then, it is meant for solving basic math problems only. The PhotoMath makers may not be too worried seeing as they have better products on the table such as blinkOCR, blinkbarcode, blindID and PhotoPay. And it’s on these that they’re really concentrating.

Follow this link to iTunes in case you’d like to try out PhotoMath for yourself. Since it’s a free download, it can’t hurt. The app is a 7.2MB file that’s compatible with Apple devices running iOS 7.0 or higher versions of the OS.