Paytm is already a pretty popular player in the digital payments space, and it’s now looking to encroach into WhatsApp territory by launching an in-app chat service called Inbox. The feature is currently available to Android users and will be making its way to iOS soon.

Paytm is highlighting 3 major tools in Inbox. One is the ability to chat with a friend without having to leave the app. Users can even communicate directly with shopkeepers to order items and pay for them right inside the chat window.

That brings us to the second big feature – the option to send or request money. While transferring cash has been an option within the Paytm app for a long time, requesting it is new. Instead of using a chat app to ask for payment and then utilizing Paytm to hand it over, the entire process can be handled within the latter application itself. 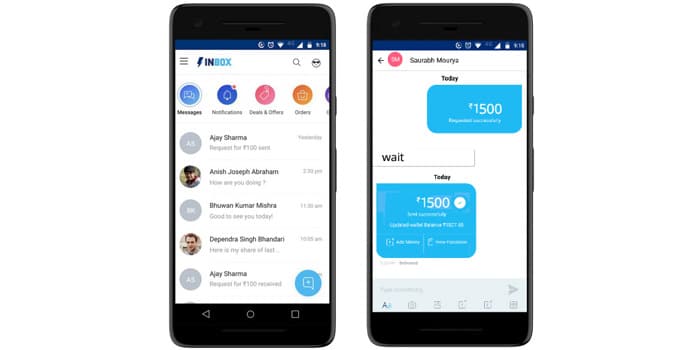 Plus, this might make it easier for business transactions where the seller can simply request a sum which the buyer has to pay. Interestingly enough, Paytm’s in-chat transactions service has come up right after talk about WhatsApp doing the same popped up this week.

WhatsApp is expected to debut its payments service in December based on the UPI platform. It’ll be interesting to see which app wins out in the battle over digital money. Another area which the two will fight over is a ‘Delete for All’ recall tool which was recently rolled out in WhatsApp and is present in Paytm as well.

In fact, Paytm has most of what WhatsApp offers, including sharing live location, sending media such as photos and videos, creating groups, and making sure all chats are end-to-end encrypted. It also serves up games to play, notifications on cashback offers, and an Orders page to keep track of items.

You can download Paytm via the Google Play Store.