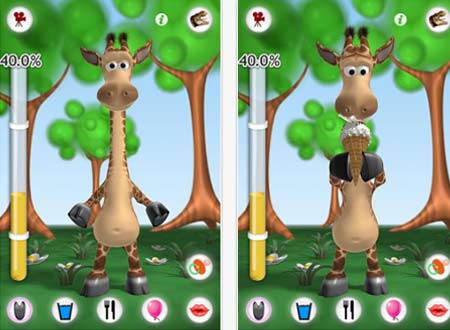 All those iOS users who have fancied poking, swiping or simply conversing with Outfit7’s Talking Friends collection of characters have a new welcome addition to be pleased about. That’s because Outfit7 has officially launched its latest interactive talking character app dubbed Talking Gina the Giraffe for iPhone, iPad and iPod touch users.

The Talking Gina the Giraffe app is a fun interactive game which comes equipped with a character mood engine. In this title, Gina the Giraffe repeats what users say in her own unique way. The app integrates a numerical happiness meter which indicates the player’s relationship quotient with Gina.

“Talking Gina represents an advancement into where mobile toys, and toys in general, are headed. By making Gina, more intelligent, more active, and more responsive, we’re giving users the opportunity to connect with our characters on a much deeper level,” shared Andrej Nabergoj, Outfit7’s CEO. “Never before has one of our characters had this much personality. Talking Gina creates special relationships with users that are unique and wholly dependent on an individual’s interaction with her, thus forging connections that are both personal and real.”

Gina can be kept cheery by playing a hand clapping game comprising of 32 levels or by offering her virtual goodies like strawberries, carrots, ice cream or lemonade. The various achievements to be won at different happiness levels are extra kisses, a helium balloon which enables Gina to repeat words in an alternate funny voice and a new baby giraffe.

The free Talking Gina the Giraffe app can be downloaded from the iTunes App Store for device running iOS 4.0 or higher versions.