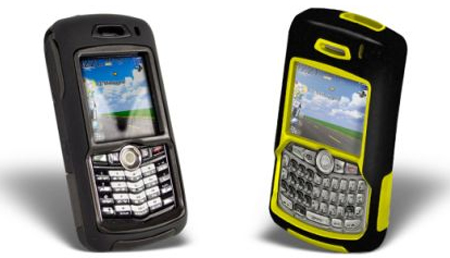 Curt Richardson, CEO of Otter Products, LLC. says, “OtterBox is thrilled to extend our Defender Series semi-rugged case design to enthusiasts of the BlackBerry Pearl and BlackBerry Curve smartphones. Because these devices are so small, we knew users were looking for something slim yet protective and these cases definitely exceed those expectations.”

The first layer slides on the thermal formed protective clear membrane to safeguard the screen and keyboard against scratching as well as dust and dirt. This layer is kept optional depending on the level of ruggedization desired. The second layer snaps together the hi-impact polycarbonate shell. Last but not the least, the third layer, wraps the silicone skin over the device to absorb bump and shock. Both the OtterBox cases are available in yellow with black or plain black colors.

“BlackBerry smartphones are used by many different types of customers, including field service representatives who sometimes work in harsher environments. Accessories such as the OtterBox 1934 and 1935 maintain usability while providing the users with a sleek, slim fit protector.” says Jeff McDowell, Vice President of Global Alliances, Research In Motion.

The two OtterBox BlackBerry cases include three Donaldson Acoustic Vents that cover and protect the microphone, headset and speaker phone openings, while still allowing clear sound transmission through the case. Moreover, the sync/charge jack is easily accessible through a silicone plug.

Although the OtterBox 1934 and 1935 cases are used to protect the handsets, yet in some conditions they cannot be very useful. Environmental conditions like shock are unavoidable. During interaction with water, the case is not fully protected against water as it is not intended for protecting against damage caused by water. Added protection is required against solid objects greater than 1mm.

The OtterBox cases also include a holster-style, swivel belt clip that is convenient to carry. The BlackBerry Pearl and BlackBerry Curve smartphones feature a magnet proximity sensor that automatically shuts off the screen to maximize battery life when stored. This is supported by the OtterBox cases 1934 and 1935.

No specific information related to the price and the availability has been conveyed. But it is available in the market at approximately US $50.00.