Is it possible to think of SMS as a thing of the past? While these services have been a very integral part of our lives since so many years, their effect has begun fading away, thanks to the entry of OTT (over the top) apps like BBM, Whatsapp and Facebook Messenger. We can now say that we have finally reached a point wherein the apps utilized for messaging have overtaken P2P (person to person) texts.

If we were to speak in technical terms, the day-to-day traffic of OTT messaging surpassed that of SMS’ sent on a daily basis by approximately 2 billion in the year 2012. According to the statistics, it has taken these online-based services roughly five years to breach this milestone, if we were to consider their progress ever since BlackBerry’s first messenger saw the crack of dawn in 2007. 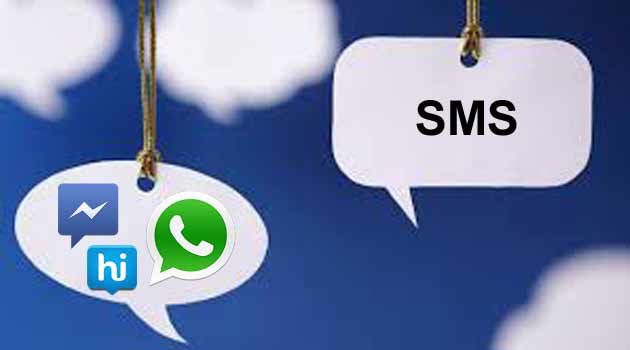 Of course this has nothing to do with the number of people employing these services, bearing in mind that more consumers are exposed to SMS than they are to free chat apps, especially those residing in developing economies. It is basically the amount of texts sent per day which is taken into consideration. To be honest, it didn’t even come as a surprise when statistics revealed every user to have sent an average of around 36 messages over OTT, while the P2P messages amounted to 5 per day.

A survey carried out in India a while ago forecasted that the mobile service market across the expanse will hit Rs. 1.2 trillion this year. Even so, we didn’t see many network operators jumping with joy. Probably because a major portion of these are being dominated by BBM, WhatsApp or other such utilities.

What also marred the carriers’ SMS revenue in the region was the attempt made by TRAI (Telecom Regulatory Authority of India) to put a cap over per day texts in 2011, furthermore driving customers towards such free messaging apps. Even though it has been said that usage of P2P texts will not give up the ghost anytime soon, it has already embarked on their downward journey. The silver lining for telecom operators is the fact that OTT services haven’t been made available to every user across the globe. So it’s understood that even those soaking in the advantages of free chat apps will have to SMS those unexposed to such utilities.