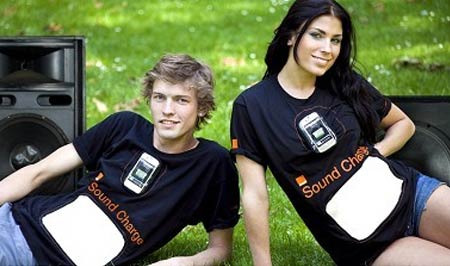 If sporting a T-shirt is a style statement for some, then this one could add some more fervor to it. Orange has unleashed a prototype T-shirt that uses noise-responsive technology for charging up phones.

Carrying a charger all around could feel like a burden for some. This new set-up strives to power the phone attached to it while on-the-go. It seeks to charge handsets while users are sporting the tee.

Andrew Pearcey, head of sponsorship at Orange UK, added, “In a vibrant festival environment such as Glastonbury, sound is such an obvious medium that it seemed like a natural fit to use it in the development of this year’s prototype.”

Sound vibrations, specifically bass frequencies are expected to produce enough shaking to generate electric through a simple surface like a piezoelectric film. Users just need to hook up their devices onto the clothing for a fast top-up charge. The process will take full advantage of sound produced in loud environments.

The Orange Sound Charge T-shirt will be live tested on site at the Glastonbury Festival around the Spirit of 71 stage.