The Oppo F1s has just been announced as the latest addition to the brand’s series of selfie-focused smartphones. Details about the phone’s specs are scarce at the moment, though the company did reveal a few tidbits here and there.

For starters, the brand’s India Twitter page has revealed that the Oppo F1s will be launched here on August 3. Moreover, the handset is set to be one of the brand’s core products for the second half of 2016 and carry on the F1’s reputation as a camera-centric offering. It’s apparently going to get a couple of new features and take existing ones to new heights. 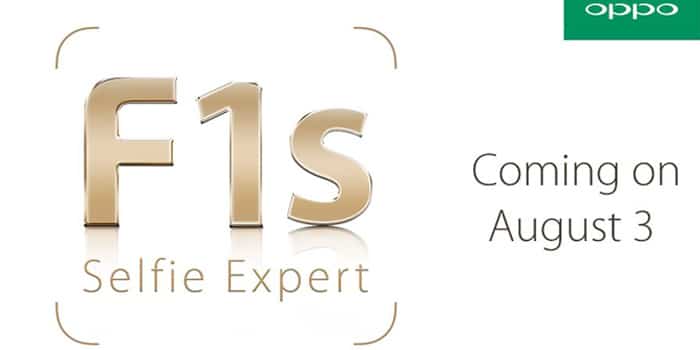 This all sounds pretty vague, but the basic headline here is that the upcoming Oppo device will be an upgrade over the F1. The latter already has a successor in the form of the F1 Plus, so it’ll be interesting to see what the new smartphone has to offer when it lands here on August 3.

Also See: Oppo to set up manufacturing facility in Noida for Rs 100 crore

The Oppo F1 has apparently been received very well globally. The manufacturer claims that it was the top handset in the $225 – $300 price range in a number of countries including Indonesia, India and Vietnam in May. It also managed to come in second in a few Asian markets like Malaysia and Thailand.

To recall, the F1 first hit India back in January at Rs 15990. It was followed by the F1 Plus in April at Rs 26990. The new Oppo F1s should find itself within that same range, assuming the company sticks to the same advanced specs at a mid-range cost formula.