You’ll soon have to pay to use Reliance Jio’s services as the telecom brand’s Happy New Year Offer is coming to a close on 31 March. The company has now tied up with Paytm to make the transition a bit smoother.

Paytm made the announcement via its Twitter handle, stating that you can now recharge your Reliance Jio mobile balance via its platform. While this applies to prepaid customers, there’s no mention of postpaid subscribers. They’ll likely be added as an option by May once the April billing cycle ends.

Paytm isn’t the only digital payments firm getting on board with Jio. Others such as MobiKwik and RechargeItNow have added the company to its list for prepaid recharges as well. The operator has so far restricted transactions to its own MyJio app and website. 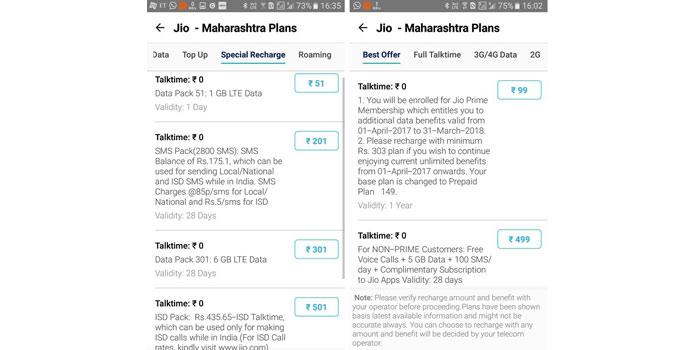 There appears to be some discrepancy regarding whether or not you can get enrolled for Reliance’s Jio Prime membership after recharging Rs 99 via Paytm. While the above screenshot seems to suggest you can, the official JioCare Twitter account said in reply to an inquiry that you can only do so via MyJio, JioMoney, the Jio site, and Reliance Digital stores.

Reliance had announced its Jio Prime annual subscription service last month. Signing up for it will set you back by Rs 99 per year. The telecom player touts that you’ll get benefits worth Rs 10000 including things like complimentary access to apps such as JioTV, as well as free data and calling.

However, you’ll have to pay Rs 303 per month if you want to continue utilizing unlimited Happy New Year benefits from 1 April. Reliance claims that this works out to roughly Rs 10 per day till 31 March 2018.

You have until 31 March 2017 to sign up for Reliance’s Jio Prime. Anyone who doesn’t opt for it will be ported to the brand’s regular prepaid and postpaid plans.