After being listed at an e-commerce website on Monday, the Notion Ink Cain 8 has been finally made official in India running Windows 8.1. The slate is tagged at Rs 9990 which makes it amongst the cheapest in its category and it also offers 3G connectivity.

For the said price, you get a complete desktop experience and some pretty good hardware as well. Visuals are delivered through an 8-inch 1280 x 800 pixel IPS LCD display with 5-point touch input. And like its larger 2-in-1 sibling, the Notion Ink Cain 8 is also powered by a quad core Intel processor, the Atom Z3735F to be precise clocked at 1.8GHz in burst mode. 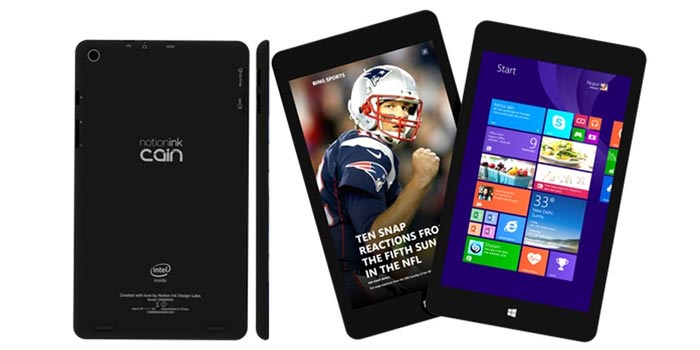 The CPU is capable of running desktop apps, but not demanding ones like Photoshop. There are a few freebies being offered from Microsoft including an entire year’s subscription of Office 365 and 1TB of OneDrive cloud storage. Notion Ink has also fitted a 2MP rear camera and a VGA front snapper onto the tablet.

For storage, there’s just 16GB of internal memory and it can be expanded by up to 64GB more via the microSD card slot. Other features of the Cain tablet include 1GB RAM, HDMI output, USB OTG and a 4000mAh battery which can deliver around 8 hours of web browsing or up to 5 hours of video playback.

As expected, the Notion Ink Cain 8 is also being offered exclusively through Snapdeal and it’s already available for purchase.