Nokia is making its way back into the handset market with a fizzle rather than a bang. The first two devices to be launched under its brand name do not work on Android. The Nokia 150 and 150 Dual SIM are feature phones instead and cost less than Rs 2000 or $26. Their release date is set for sometime in the first quarter of 2017.

HMD Global, the company that will be producing said handsets, hopes to start a successful run by banking on Nokia’s reputation of offering sturdy devices. Legends have been written about the durability of the Finnish brand’s phones; like the number of times they’ve allegedly stopped bullets and saved their owners’ lives.

In a press release announcing the launch of the Nokia 150 and Nokia 150 Dual SIM, HMD has confirmed that it will be introducing a new smartphone range. According to rumors, at least two of these will have Android 7.0 Nougat, Qualcomm Snapdragon 820 chips and 2K resolution screens. A 13.8-inch tablet and mid-range D1C phone may also be incoming. 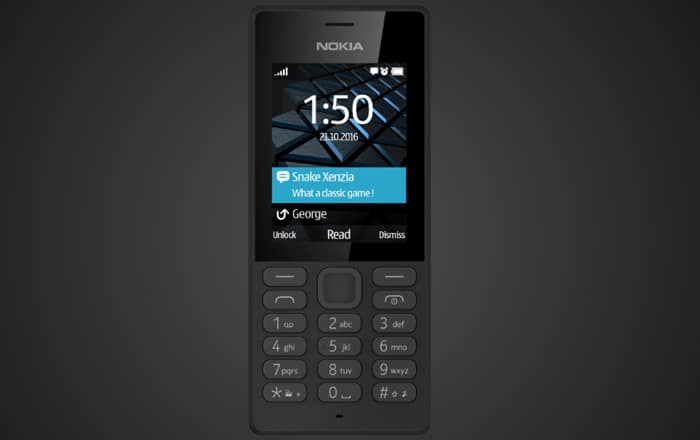 Getting back of the Nokia 150, it features a 2.4-inch 240 x 320p non-touch display and a barely useful (in this day and age) 0.3MP camera. It runs on Nokia Series 30+ and offers 32GB expandability via its microSD card slot. Other specs cover 2G support, Bluetooth connectivity, and pre-loaded games like Snake Xenzia and Nitro Racing.

The frame of the device is built from ‘hard-wearing’ polycarbonate. The exterior is also said to boast of scratch-resistant color. It’s possible HMD let the paint bleed right through the shell in order to keep it from betraying any wear and tear. Users can expect up to roughly 22 hours of talk time from the 1020mAh battery powering it.

HMD Global is aiming the Nokia 150 and its dual SIM twin at India, the Middle East, Africa, certain parts of Europe and the Asia-Pacific region.