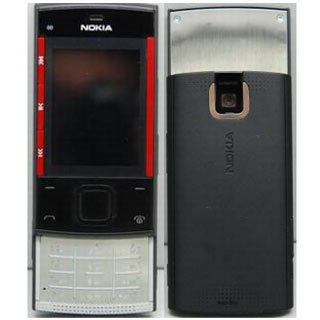 Nokia X3 along with the X6 made its debut few months back and finally the former music phone has now received approval from the FCC.

According to UnwiredView, Nokia X3 slider is equipped with 3.5mm headset jack, dedicated touch music keys on the side, Bluetooth 2.1, stereo speakers and stereo FM radio. The S40 mobile phone packages a 2.2-inch QVGA display of unknown resolution. The handset sports a 3.2 megapixel camera with flash. The Nokia mobile phone also offers access to Ovi Store. A 2GB card will be included in the box and it also offers MicroSD card support.

Unfortunately, the Nokia X3 does not support 3G. Apparently, the company claims that the X3 is the first Series 40 Ovi Store-enabled device. The network carriers which may introduce the Nokia X3 are not yet known. Seemingly, AT&T and T-Mobile are more likely to bring this slider to the market.

Reportedly, the unlocked version of the Nokia X3 will be retailed for $169 in Europe. US customers can expect the Nokia music phone at a similar price, incase it is introduced in North America.