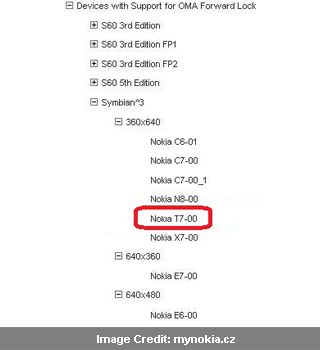 It looks like Nokia has been found in the midst of quite a few unofficial sightings over the past few months and by sightings, we aren’t talking about a new mobile phone with UFO-like attributes. Back in November, the Nokia X7-00 was glimpsed running on the latest version of Symbian and packed with four stereo speakers. Now the company is back enticing mobile phone enthusiasts with what seems to be a whole new series altogether.

According to My Nokia Blog, Symbian Tweet reports that a certain Nokia T7-00 has spilled across the company’s Ovi Publisher Tool. This offering is seen located under the Nokia N8-00 handset and categorized within the confines of the Symbian^3 group. The device listing is placed atop the unannounced Nokia X7. It is also touted to be endowed with a resolution of 360 × 640 px.

With this new revelation, it appears that Nokia fans can look forward to a brand new T series of handsets. Owing to what we currently know about the T7 which is precious very little, it could just unfurl onto the mobile terrain disguised as a handset and not a tablet.

As of now, there is no confirmation from Nokia about the T7-00 device. We also haven’t really ruled out that the mention of the offering could just be a typo of sorts. So until any concrete evidence of its existence crops up, we guess it’s just swimming through leaks for us.