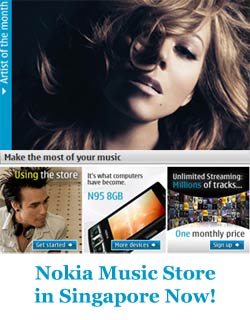 Nokia has been thriving on music, right from the launch of its music phones and its popular Nokia Music Store. With the motto of “Connecting People” Nokia launches it’s Nokia Music Store for the music lovers in Singapore.

In South-east Asia, especially the Singapore masses have appreciated urban music and center rock, punk, along with other genres in this region. Rock has been affluent in Singapore by the late 60’s with some good bands like The Quests; by giving us some hits like Shanty and don’t play that song, to name the few, as well the touch of Chinese and Malay touch to it. So its been made official that Nokia is taking a step further into music by launching their web related site called as Nokia music store which will be live. It will include many sound tracks from some of the international artists. Offers a new independence to all the music lovers, by allowing people to come across and enjoy music directly from their homes or from their PC’S any time and anywhere, it turns out to be a special attraction as well.

Grant McBeath the general manager of Nokia Singapore, expressed his views by commenting that, “It is a delight for all music lovers as they can get access to a wide range and array of music right from pop, dance, trance including Asian, and can build their own music collection and a library from their phone as well as PC gadgets.” On this Gary See, the managing director of the universal music Singapore concluded that, “The increase of demands for digital music; the audience get an opportunity to connect with their favorite artists and there by offering a platform towards a wide range of options”.

Nokia music store is an option where one can come across and Shop for Music by ordering it directly from the PC and also from their compatible Nokia phones, it’s convenient also gives space and the leisure to shuffle between the phone and PC, lastly an extra service that can be copied to a CD and there by can also be transferred on to the compactable digital music player. The Individual tracks will cost $2 Singapore dollars per track and download most of the albums at a price of $16 each and to add icing to the cake, the Music Store also offers unlimited PC streaming at $16 per month.