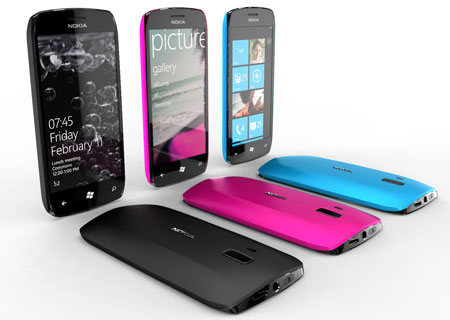 Mobile aficionados seem to be sitting at the edge of their seats in high anticipation of some confirmation or valid information pertaining to the Windows Phone 7 handsets fashioned by Nokia. Well, we now see the official Nokia Conversations blog satiating their appetite for the same by snapping out official pictures of the Windows Phone 7 devices.

Through these delectable pictures, the company plans to make smartphone enthusiasts look forward to the Mobile World Congress as more information is slated to be divulged then. The unofficial images of the trendy handsets in question had previously been slapped onto the Internet but then again they were unofficial and left fans in two minds wondering whether this was going to be the end result.

Well now since the Nokia Conversations blog has put these queries to rest by unveiling that these were in fact the real deal, we can move on to speculating its various features in a somewhat deeper manner. Appearing to sport an extremely slim appearance, these handsets seem to bear a new handset design altogether that seems to be quite unlike what Nokia has attempted in the past.

The company may be aiming at appealing to gamers by incorporating Windows Phone as it offers gaming goodies like Xbox Live and more. There appears to be a Windows home button and a camera at the rear of the phone. Additionally, it seems like the handset would splash across the market drenched in quite a few vibrant hues such as pink, white, black, blue and green.

All we can do now is to wait for some more specifications to emerge at the MWC that is slated to kick-start today.