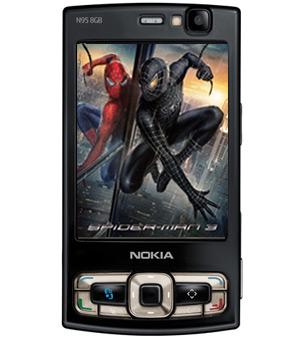 N95, a smartphone launched by Nokia last year, officially hit shelves at the end of March 2007. The new 8GB version of the N95, introduced just a few days back, is now pre-loaded with the full-length feature film Spider-Man 3.

Released in May, 2007, Spider-Man undergoes his latest incarnation; his suit turns jet-black and his power enhances. The Nokia N95, too, has undergone a similar incarnation and is emerged as the Nokia N95 8GB. The device has a sleek black cover, instead of the original silver. Its enhanced powers includes 8GB of onboard flash memory, slightly larger screen (up from 2.6 inches to 2.8 inches), and a black faceplate instead of the original silver. The phone uses a two-way slider to access either media playback buttons or a keypad or dedicated media keys that allows the users to control video on their mobile just as they would on DVD: providing play, pause, fast forward and rewind buttons.

Apart from the pre-loaded film, the special edition Nokia N95 8GB will also be loaded with Spider-Man 3 message and ring tones, wallpapers and screen savesr. Users can also enjoy Special Spider-Man 3 games, ring tones and additional video clips by downloading them. Spider-Man 3 is selected by Nokia to show off the full capabilities of the device due to the overwhelming demand from Nokia Nseries users. When asked which film Nokia Nseries users wanted to watch on their device, Spider-Man 3 was voted as the ‘most wanted movie’. Spider-Man3 has huge global appeal of being the #1 grossing film of 2007 at the international box office. As the movie was released in different languages all over the world, similarly, the user can watch this movie in ten different languages and subtitles combinations.

Nokia N95 8GB’s huge internal memory capacity implies more music and more movies. It has DVD-like quality video capture. The control allows film fanatics to create their own movies, also share their creations and favorite movies with others by using the easy ‘transfer to PC functions’. N95 has the innovative 2-way slide concept that makes it easy to switch between different modes, from reading maps to watching a video. A numeric keypad slides out from one end of the device while dedicated media keys slide out from the opposite direction, and converts the display into full screen landscape mode. With the powerful 3D graphics, the Nokia N95 has a stunning user interface that makes the device intuitive to find the features and services that every user would like to have.

The enhanced Wi-Fi connectivity ensures the connection whilst on-the-move and the assisted GPS (A-GPS) keeps on the right path for worldwide adventure. The N95 also connects to the Internet through a carrier packet data network such as UMTS or EDGE. Web pages may be viewed in portrait or landscape mode and automatic zooming is supported. The N95 also has built-in Bluetooth and works with wireless earpieces. The original N95 does not support US based versions of UMTS/HSDPA; UMTS features in this version of this phone are disabled by default as sold in the US. The phone can also act as a WAN access point allowing a tethered PC access to a carrier’s packet data network.

In addition, there is HSDPA, and 5 megapixel camera that was already found in Nokia’s existing flagship “multimedia computer”. With the new Nokia N95 8GB, the N95 users would be able to watch Peter Parker battle his demons with his new suit This special Spider-Man 3 Edition of Nokia N95 phone will be available only in Europe and selected countries in the Middle East and Africa region.

Nokia has always given a new face of technology to the world, but with Nokia N95 8GB and all it’s amazing features, Nokia NSeries is set to take mobile entertainment to the next level.