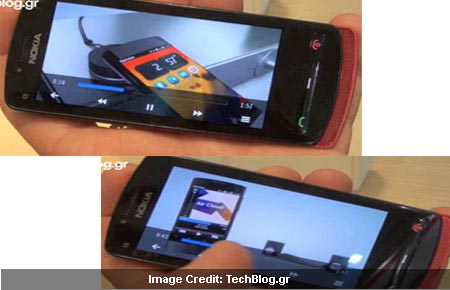 The next Nokia smartphone, 801, believed to be the most advanced one to emerge from the company’s stable, has apparently been spotted in a video. As GSMArena reports, the Nokia 801 can be seen making a cameo in the Nokia 700 hands-on video from Technoblog.

To be named either Nokia N8-01 or Nokia 801 according to the new naming strategy adopted by the company, the next generation smartphone reportedly sports an edge-to-edge curved qHD screen. Rumors are rife that it will equip one of the best mobile cameras and is most likely to run on the newly released Symbian Belle.

This handset is being touted as the successor to the Nokia N8 and could be NFC (Near Field Communication) enabled. The popular N8 incorporates a 3.5-inch AMOLED capacitive touchscreen along with a 12MP camera possessing Carl Zeiss optics and Xenon flash to shoot in HD. It presents a host of features to its users such as Ovi Maps, free global walk and drive navigation, public transport lines and local reviews.

Loyalists who swear by their Nokia phones have been awaiting the arrival of the Nokia N8-01 and it’s reported spotting has already started a buzz about its official availability and price. Appearing to be quite sleek in design, it could surpass the popularity of its predecessor.