The Nokia Lumia 620 price and release date has surfaced in the UK over a month after the smartphone had been revealed initially. It is bound to land in stores across the country this month itself, but as of now users can call dibs on the handset by pre-booking it.

The Lumia 620 may not be a desirable option for those looking out for a high-end phone, but the OEM has bundled it with decent specifications, placing it under the entry-level category. It is driven by the Windows Phone 8 OS and puts forth a UI with Live Tiles across a 3.8-inch capacitive 480 x 800 touchscreen display.

Users should be able to gaze at the panel on the sunniest of days without squinting, thanks to the ClearBlack technology employed by the screen. The handset gains steam from a 1GHz dual core Qualcomm Snapdragon S4 processor which is ready to carry out much of multitasking together with 512MB of RAM.

A 5MP camera accompanied by an LED flash rests on the flip side. It packs features such as 4x digital zoom, auto focus with a two-stage capture key, geotagging and more. People can also indulge in live video calling with the help of a front-facing VGA lens.

8GB of flash memory seems like a fair deal for hoarding content, but those who don’t agree have the liberty to expand it to up to 64GB using a microSD card. Apps like Cinemagraph, Smart Shoot, City Lens and Nokia Music should catch users’ attention.

Apart from the usual Bluetooth 3.0, NFC and Wi-Fi 802.11 a/b/g/n, there is mobile hotspot that permits connection of up to 8 devices. The handset draws power from a 1,300mAh battery which holds the ability to provide 2G users with up to 14 hours of talk time or folks on 3G can utilize 9.9 hours of talk time or 61 hours of standby.

Clove has tagged the price for the Nokia Lumia 620 in the UK at approximately £227, including taxes. The smartphone is up for pre-order at present and will commence shipping from January 28. 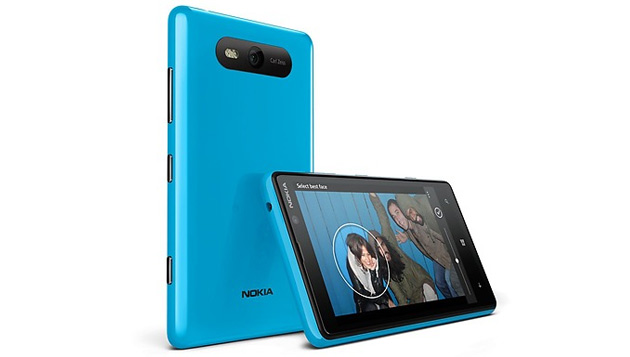