It is that day folks when the Nokia Lumia 1520 (or call it the Bandit if you may) finally decides to stealthily treat us with a glimpse of its design. However, we must admit that there had been an instance in the past wherein the Nokia phone’s front panel had been caught in a leaked image and comparing both the pictures, it could be said that they belong to the same device.

The giant which makes the Lumia 1020 look so puny in the photo embedded below, is said to be the Finland-based company’s largest offering so far. It also comes with ‘proto.nokia.com’ etched on its chin, but a little bit of squinting is required to read that. And clearly, the device has been splashed with a tinge of red similar to most of its siblings. 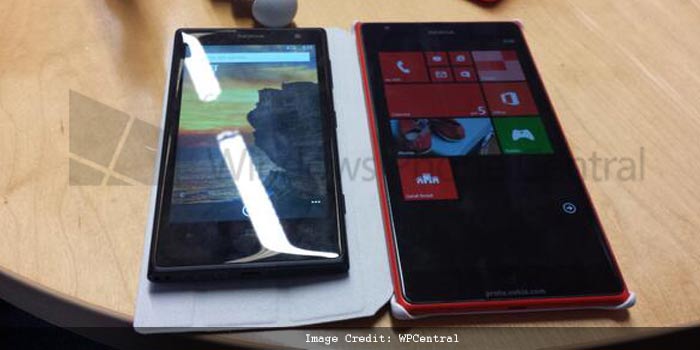 A polycarbonate frame for the Nokia Lumia 1520 is on the cards, while a 6-inch screen estate offering the benefits of full HD visuals is also expected. With so much space on the panel to spare, an additional column of Live Tiles seems to have squeezed in.

As had been said earlier, the smartphone ought to flaunt a 20MP rear camera akin to the Sony Honami. But what remains to be seen is whether it will also feature a flat back or users will have to deal with a nagging bulge on the flip side.

Along with rendering the image, a post on Windows Phone Central has revealed that the Lumia 1520 has been fated for AT&T networks. It should be receiving official recognition sometime towards the end of the next month, while its release date ought to fall in the month of November.