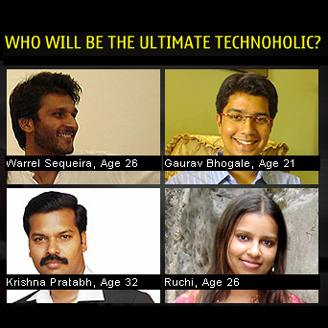 Nokia has short-listed four challengers known as ‘Technoholics’ who will play the game for three whole days in the Digital Playzone in public.

The players will have to perform entertaining acts and complete a series of increasingly difficult task which will involve the use of technology and multiple gadgets.

The viewers present around can watch, participate, rate, interact, blog and comment on the task which the Technoholics will have to complete.

The player who wins the challenge will be crowned India’s Resident Technoholics and will also win a trip for two to Rio for the Mardi Gras celebrations as well as a new Nokia N81 handset.

The public around also has a chance to win Nokia N81 by just participating in the Digital Playzone online and sending the task the player has to do.

According to Mr. Vineet Taneja, Director-Multimedia, Nokia India, “Nokia believes in enabling connectivity, between people, technology and applications. So this challenge is a wonderful opportunity to showcase some of the latest consumer technology and create a fun competition that brings different communities together through participation.”

The Nokia Digital Playzone contest was announced on the 1st of November 2007 and the contest has been held in seven countries across the region and has received huge response form the all over the country.