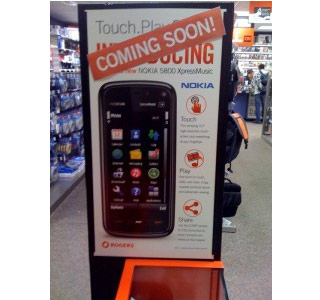 The Nokia 5800 XpressMusic was the first touchscreen equipped handset for Nokia. This S60th edition cellphone has been available in Europe for some time now.

According to MobileSyrup, there were signs that this phone is going to be launched in Canada as well. There was a billboard advertising the imminent arrival of the Nokia 5800 XpressMusic handset by Canadian wireless provider Rogers. This billboard was at a ‘The Source’ retail store in Ottawa. It seems that similar posters are coming up at Rogers locations across Canada.

The Nokia 5800 XpressMusic has a 3.2 inch touchscreen with 360×640 resolution and 8GB of storage capacity through an included microSD memory card. It also includes a built-in web browser with Adobe Flash support, an integrated GPS sensor, Wi-Fi and Bluetooth 2.0 for easy file transfers.

There is no information about pricing or concrete release dates for the 5800 XpressMusic at Rogers in Canada.