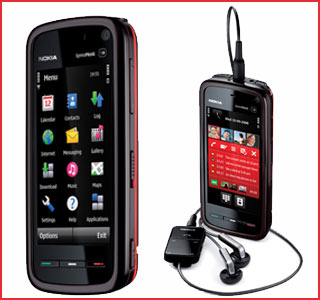 Expanding the wide range of music phones in United States, Nokia announces the availability of the highly anticipated Nokia 5800 XpressMusic phone. The phone is available at an affordable price and equips a resistive touch screen interface.

The phone comprises all the music features that should entice a music enthusiast. The Nokia 5800 XpressMusic includes a graphic equalizer and built in surround sound stereo speakers. With its immense memory storage capacity upto 8GB support, users can store in approximately 6000 music tracks.

Ian Laing, Vice President, North America Sales, Nokia commented, “When it comes to music phones, people all over the world want a device that is a great music experience and still works really well as a mobile phone, without sacrificing features,” and he further added, “The Nokia 5800 XpressMusic delivers on this and has clearly proven to be a device that consumers are clamoring for – selling more than one million worldwide since its introduction a few months ago.”

The Nokia 5800 phone sports a 3.2 inch widescreen display and its touchscreen interface gives the user an option of QWERTY keypad as well as the regular alphanumeric keypad. The phone incorporates a 3.2 megapixel camera with Carl Zeiss lens. Users can also share their images easily via Facebook, Flickr or Ovi. The contact bar feature will allow users to highlight four favorite contacts on home screen. By just a single click, users can track down digital history of emails, phone logs, text messages, photos and blog updates of the contacts.

The Nokia 5800 XpressMusic phone will be available at an estimated price of $399.