The Nokia 2 has gotten leaked online in a new sketch which compares it against the already-released Nokia 3. The latter currently holds the crown of being the brand’s cheapest smartphone, but the former will probably be even more inexpensive.

Nokia’s numerical naming scheme so far has directly corresponded to the price of the handset and it doesn’t look like the Nokia 2 will be any different. The device seems to have the same 5-inch screen size as the Nokia 3, but with one big change at the bottom.

While the Nokia 3 has touch capacitive keys below the active display, the Nokia 2 appears to have on-screen navigation buttons. Unfortunately, the second cuts in to the available screen space. The Baidu leakster who posted the photo claims that that the phones look similar from behind. 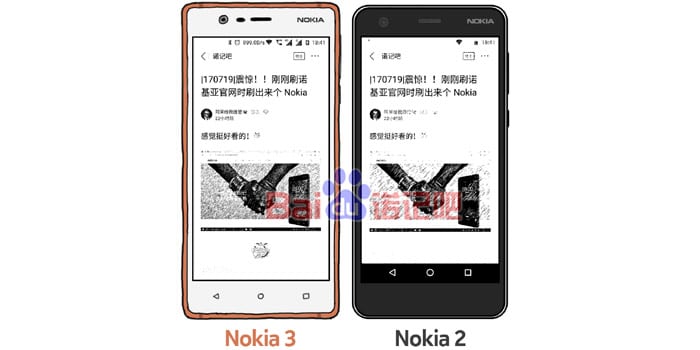 He also asserts that the Nokia 2 resembles the Lumia 620 thanks to its rounder curved design at the corners. Under the hood, the smartphone could get by with the assistance of a Snapdragon 210, Snapdragon 212, or MediaTek processor.

Chances are since the Nokia 3 features a polycarbonate body, the Nokia 2 will be made out of the same material. The latter probably won’t get its hands on a fingerprint scanner either. On the other end of the spectrum, the Nokia 8 is expected to make its debut on July 31 and be the company’s most expensive smartphone yet.

Also See: Nokia 5 now up for pre-bookings in India