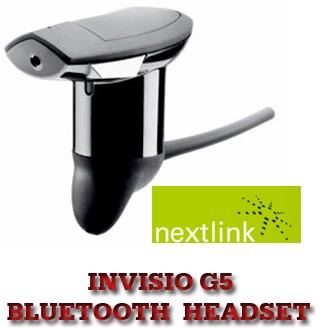 The INVISIO G5 is a small and discreet wireless headset. It weighs less than 6 grams. INVISIO G5 is only 3.3cm in length and 1.6cm in width. This Bluetooth headset is known as the smallest and lightest in the world.

The INVISIO G5 has a soft spring comfort, three button interface which controls the functions. The headset has a protective case which is dual functioning as it not only guards the headset but also charges it when the user is traveling.

INVISIO G5 can work without the charging for 4 hours and has a talk time of 150 hours while stand-by time up to 30 days.

Nextlink also launched INVISIO B3 which is the basic model which is also light in weight and provides the talk time up to 6 hours and 170 hours of stand-by.