The new BlackBerry 10 smartphones release date has surfaced and certain retailers in Canada have already put the device up for pre-order through their retail stores. RIM is slated to introduce its latest OS on January 30, 2013.

According to CrackBerry, both Best Buy and Future Shop are now accepting pre-orders for the new BlackBerry 10 smartphones which run on the latest mobile platform. The company has refrained from letting out details regarding the handsets that are up for pre-sale, so prospective users who are interested in placing their orders will have to rely on rumors that have been doing the rounds on the web. While we know how the upcoming OS is like, features of smartphones based on it have not been confirmed officially as yet.

And that’s not all, along with the pre-order status, we have also managed to dig the exact availability details of the devices in question. A report by the guys over at BGR reveals that BlackBerry enthusiasts will be able to lay their hands on the latest phones on February 28. While the document that divulges the launch date has been leaked via Bell, it is believed that all other carriers will also introduce the gadgets during the same time.

This is not the first time when the upcoming devices are under the scanner. A certain N-series phone as well as the Z10 belonging to the L-Series of the Canadian conglomerate have already been snapped in their full glory. While the former flaunts a touchscreen as well as a full QWERTY keypad, the latter is contented with a multi-touch display. The Z10 is apparently very similar to the 10 Dev Alpha phone which was unveiled last year. 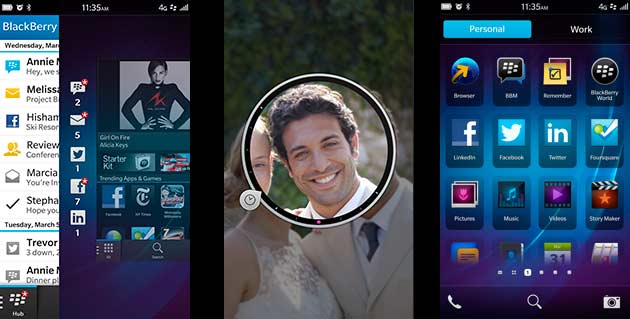 Some of the characteristics of the latest OS include a new virtual keyboard which brings intuitive functions for accuracy while typing. There’s BlackBerry Hub for allowing customers to keep in touch with friends at all times with social features and a system that enables them to peek at their notifications without closing the application running on the screen.

The new BlackBerry 10 smartphones are indeed up for pre-order as the concerned retailers have put it up on their respective web portals. But we are not sure about the shipping date as yet.