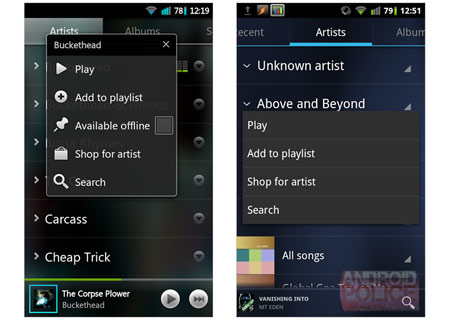 It seems that the yet to be released version of the Android operating system known as Ice Cream Sandwich will also be carrying an updated Google+ 2.0 along with Google Music 4.0.1. Recent screenshots of the soon anticipated Samsung Google Nexus by Android Police in two separate posts suggest that the new mobile platform will debut these suitably transformed apps.

According to the images, the new Google+ version 2.0 will greet users with heavy changes in the user interface. The most noticeable of them is the name change of Messenger and Conversations to Chords. Going back to the recent makeovers Google brought about in this social networking service, we can distinctly recall it being changed from Huddle to Messenger.

Another significant inclusion in the brand new operating system is the upgraded Google Music 4.0.1 app. This is a step up from the earlier version 3.0.1 which is available now. The hopefully soon-to-be released app sports a more organized look along with cleaner tabs and better structured player area at the bottom. The selection menu has also switched from a mid-screen pop-up to a dialog box. Tapping on the album cover even opens up more options than just shuffle and repeat. It allows users to track ratings and also know track or artist details.

If the Samsung Google Unpacked event which was to happen on October 11 would not have been cancelled, it was a just matter of a few days before the world could be seeing the new Ice Cream Sandwich by Android. This would probably be accompanied by the Google Music 4.0.1 app and the Google+ app version 2.0.