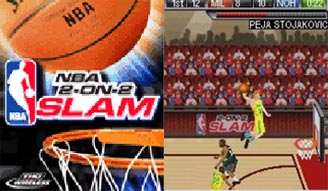 THQ has stated that NBA 2-on-2 Slam will be made available for wireless download across all major carriers. The game provides players the opportunity to dribble and shoot using their favorite NBA stars.

The NBA 2-on-2 Slam is a pick-up and play stimulation style basketball game. The player has to use simple button sequences to create fluid combinations of passing, ball handling and shooting.

The player can choose three NBA stars from 30 teams and can sharpen their point guard skills with Steve Nash. Dominate the center with Yao Ming or score with Kobe Bryant.

Each player is performance rated to represent actual player attributes, so fans are set to rack up points with the likes of LeBron James, Allen Iverson and Dwyane Wade.

NBA 2-on-2 Slam allows gamers to play in fantasy arenas in Los Angeles, Chicago or Houston. When players are scoring and winning, their power increases in a ‘SlamMeter’.

The player can execute advanced ‘SlamMoves’, where they have the ability to sink every shot and impress the crowd.

The players who want to find out more information about the game NBA 2-on-2 Slam mobile game can visit the THQ site or the NBA official site.