The iPhone X has hit availability all over the globe, prompting people to wait in long lines to get hold of the smartphone. India isn’t any different, but one particular Apple lover decided to make a big spectacle out of the process.

Instead of waiting in line like a normal human being, Mumbai resident Mahesh Paliwal decided to ride on a horse to pick up his pre-ordered iPhone X. Not only that, he also brought along a full procession and band party to play drums.

Bystanders would be forgiven for thinking he was on his way to a wedding, if not for the giant poster he carried that stated “I love iPhone X.” The placard also mentioned where he bought the phone from, so it’s possible that this was nothing more than a publicity stunt on the shop’s part to raise the hype around an already hyped-up phone. 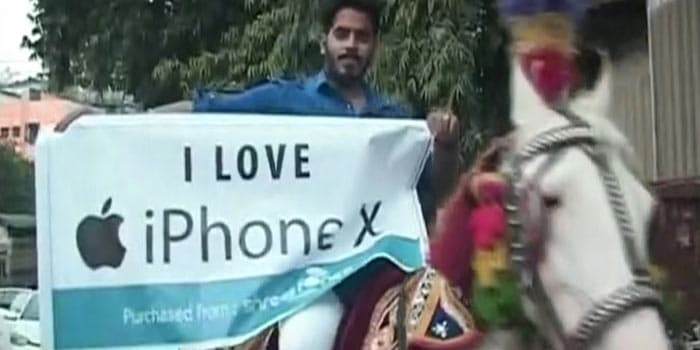 Plus, the store owner went out of his way to accommodate Paliwal, handing him his iPhone X without making him get down from the horse. The smartphone was wrapped in ribbon and given away with a bouquet of flowers, a bit much for a simple transaction.

Anyone who’d like to buy the iPhone X without having to ride a horse will have to act quickly since stock is reportedly wiped out across the country. Fresh units will probably take a few days or weeks to arrive. Both Flipkart and Amazon say the device is unavailable. There’s actually a worldwide shortage in supply, so things may not improve for a while.

When the supply situation does improve, you can buy the 64GB iPhone X priced at Rs 89000 and the 128GB one at Rs 102000. Reliance Jio is offering a 70% cashback deal, but is only displaying a ‘Register Now’ page for the device.