Home Google Firefox for Android beta updated, ‘something big’ on the cards 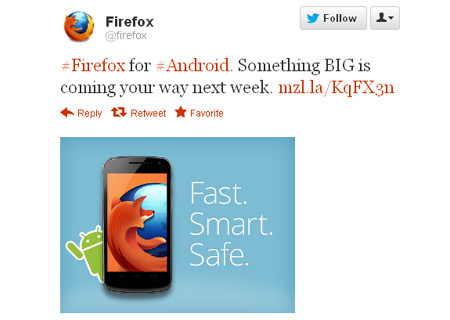 The Firefox for Android beta app has been updated, while Mozilla’s official Twitter page for the browser indicates ‘something big’ will be happening next week. Though it’s not quite clear as to what’s in store for fans, it could be related to the dropping of the beta tag.

At the same time, there are a few guesses surfacing, as the Google I/O event is scheduled for next week. Speculations are rife that Mountain View may unveil the Jelly Bean OS on the occasion, which apparently means that a new browser may be on the menu for the upcoming UI.

According to Engadget, Chrome is expected to serve as the main browser for the to-be-released Android OS. The Mozilla tweet shows off an image of a smartphone with the Android logo popping up from behind it. The words ‘Fast, Smart and Safe’ are seen in the picture and these clearly indicate an impending browser version.

Talking more about the updated Mozilla FireFox beta, the app is built to provide users with a swift browsing experience along with new security and customization attributes. Currently reaching v14.0, it is compatible with Android 2.2 and higher devices.

While Chrome is already accessible on desktops, odds are that the company is set to release the tool for smartphones too. If that’s how things turn out to be, then mobile device users may just experience a range of improved features mostly dealing with security, speed and intuitiveness.

Till then, we can hope that the ‘something big’ Firefox teaser indeed brings with it big upgrades to Android browsing. As for the Mozilla Firefox beta app for Android, it can be downloaded via Google Play.