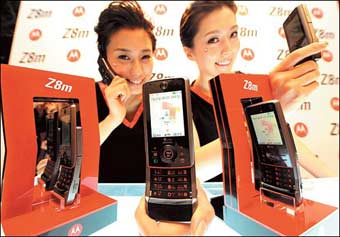 Motorola released its uniquely designed phone for the Korean market. The 3G Motorola Z8M kicks starts it popularity in South Korea with it’s out of the box curve which resembles a banana.

The curvaceous phone comes with a huge 4GB built-in memory and features a 2.2-inch QVGA display. The phone clicks away with a 2MP camera and boasts off about its 7.2Mbps HSDPA connectivity teamed with Bluetooth and USB support as well.

Rick Wolochatiuk, new chief of Motorola’s Korean phone division, said that Motorola plans to expand its reach with the 3G phone models with the launch of Z8m and “Z8m is only the beginning of our rich portfolio for the Korean 3G market,” he said.

The 3G phone launches itself proudly in South Korea under SK Telecom carrier and displays a price tag of 500,000 won which is around $501 USD.