Motorola has already said that its highly anticipated Razr smartphone will be launched in India on March 16, but we now have confirmation that it will be sold in India exclusively through Flipkart. A banner ad for the said device has been spotted on the e-commerce site, along with the date and time of its arrival. As for the price, it is expected to go through the roof, as the phone is being sold in the west at $1,499 (approximately Rs 1,11,000). 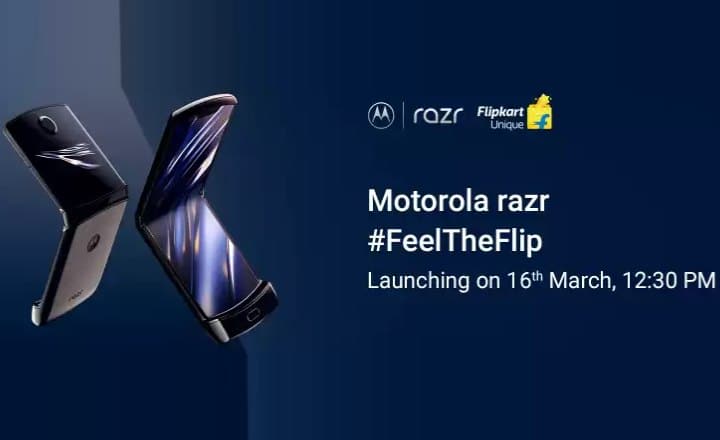 Earlier this month, Motorola had made the March 16 Indian launch date of the Razr clear, but hadn’t provided any other details regarding the device. The phone has taken its own sweet time to arrive here, considering its first showcase had taken place way back in November 2019. No event has been announced for the Indian launch yet, and given the fears around the Covid-19 virus, we’re pretty sure it will be unveiled through a livestream.

The Motorola Razr harks back to the original Razr V3i from 2004, which had achieved immense popularity for its futuristic looks. The new model keeps its design DNA intact but grabs modern hardware, which includes a vertically folding 6.2-inch OLED display that sits inside its clamshell mechanism. When the phone is shut, it renders basic information like time, date and notifications on another tiny G-OLED display.

It isn’t a monster on the inside, but its Snapdragon 710 chipset and 6GB of RAM should provide satisfactory performance. The Razr runs on a 2510mAh battery, and grabs a 16MP rear camera that’s paired with a TOF lens. A 5MP front camera also makes its way onto the device for clicking selfies.

It’s pretty clear that the Motorola Razr is banking very heavily on the nostalgia factor, as its specifications aren’t something that will impress many buyers. Besides, its expected price of around Rs 1,00,000 is also something that will put many people off.