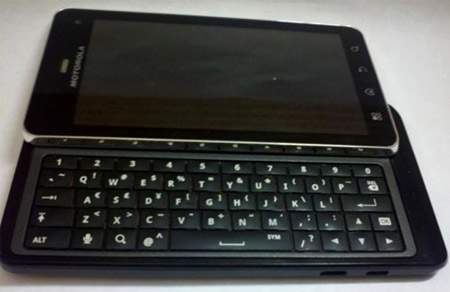 Just a couple of days ago, the release details of Motorola’s Droid X2 were made official. Here is some news that’s leaked about the upcoming version of the original Droid handset, the Droid 3. Running over TechnoBuffalo, revealed that a 4-inch qHD screen, dual-core processor and 8-megapixel camera are the possible features of the Motorola Droid 3. Though this isn’t a complete list of specs, it may proffer a brief idea of what to expect from the updated device.

The handset has a fifth row of keys that finally bring the much required dedicated number buttons. It is powered by a dual-core processor which appears to be the Nvidia Tegra 2 processor or OMAP. The Droid 3’s forward facing camera eases video chatting with crystal clear images.

It also incorporates an HDMI out port that caters to video watching needs. This new addition to the Droid line will not have any LTE support. Hopefully, this device astonishes the mobile terrain with its unmatchable list of features and looks.

Though enthusiasts should be able to lay hands on the Motorola Droid 3 from June onwards, no pricing details have been divulged.