The Moto Z2 Force is all set to land in India soon, with the brand formally issuing out invites for the event on February 15. Interestingly, the invitation indicates that the phone will be bundled with a free TurboPower Pack Mod.

To recall, the TurboPower Pack Mod made its way to India back in December last year. It’s priced at Rs 5999 here, making it an attractive deal if it really does get paired with the Moto Z2 Force. The accessory contains a 3500mAh fast charging battery and can be attached to the back of the phone to grant it a 7-hour boost within 15 minutes.

The Moto Z2 Force itself contains a 2730mAh battery which the company claims can last for 24 hours of mixed usage. The device actually got unveiled all the way back in July 2017 and has taken its time to arrive in India. It sells at $720 in the US, translating to Rs 46240 in India. 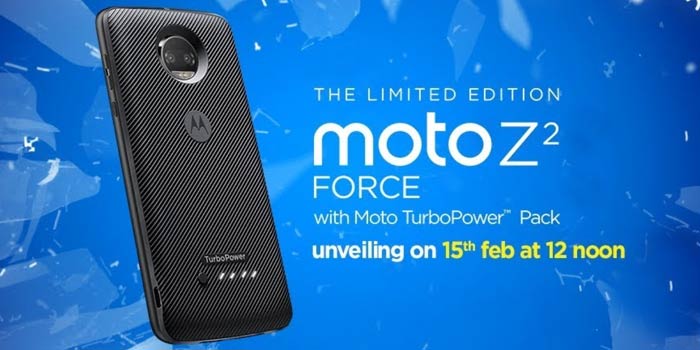 Here’s a quick rundown of the Moto Z2 Force’s specifications:

Motorola is notably calling the shatterproof phone the Limited Edition Moto Z2 Force in the above invite. This could be a clue that it’ll be available in limited quantities in India. We’ll know for sure when the launch event rolls around on February 15. It begins at 12 noon and will be streamed live via YouTube.