A Motorola Moto X+1 was just going to be made considering that the company enjoyed so much success with its entire lineup of budget-friendly Android devices. Unlike Microsoft which had to axe the Nokia X and other products by the Finnish company after acquiring its business, Lenovo clearly made a winning bet when it handed Google a sack of cash for Motorola.

Rumors about various upcoming Motorola devices have been spinning around and Evan Blass who made us all sad by announcing his retirement recently, has a parting gift for enthusiasts. The once-prolific leakster has tweeted a press photo of the Moto X+1 through his @evleaks Twitter account and it matches perfectly with the sneak shots we’ve seen before.

My retirement gift to you. pic.twitter.com/N2B2Eg6bjz

And dear lord, what an eyesore its rear casing is! The purported Moto X successor has the brand logo designed to be awkwardly large, sitting just below the camera where the flash could be seen previously on its predecessor. The image we’ve posted below was outed by Android Police and closer inspection seems to paint the logo as a button of sorts.

Also see: Moto X versus Moto G, a comparison review of their specs

What’s more, the flash unit has been revamped to look like a ring around the lens. You may also have noticed the arrangement of the front speakers which is similar to that adopted by the Moto E. Blass’ leak almost confirms that customization tools will be offered with the Moto X+1 handset, unless white, black and wooden back options are the only ones set to be made available. 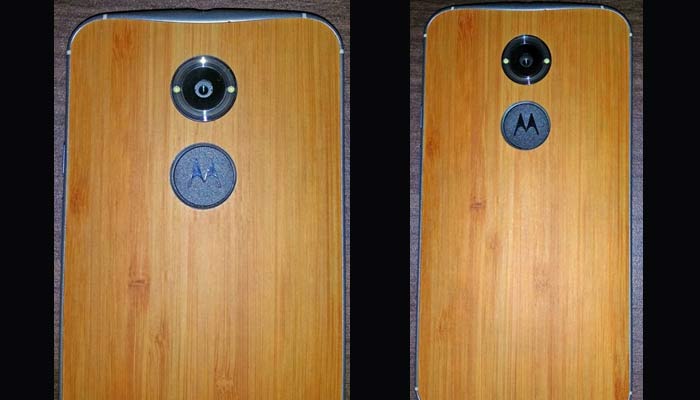 Key specs of Moto X+1, best taken with a pinch of salt:

We know you’ve been wondering about the specifications, which is why we’ve included the aforementioned information leaked by Geekbench. The Moto X+1 is set to make its debut along with other Motorola devices on September 4.