MoFirst is an Indian startup with an eye on the country’s handset market and according to the latest, it is intent on releasing handsets in all regional languages by March 2015. If you remember, a bunch of IIT graduates had introduced an Android phone called Firstouch that could translate English into Indian languages and vice versa.

MoFirst which was founded in 2008, is the brand behind the development and installation of the patented technology in question. It functions to translate and transliterate text from one language to another. The company had already launched a variant of the Firstouch phone supporting the Gujarati language, for Rs 6000 in Rajkot. 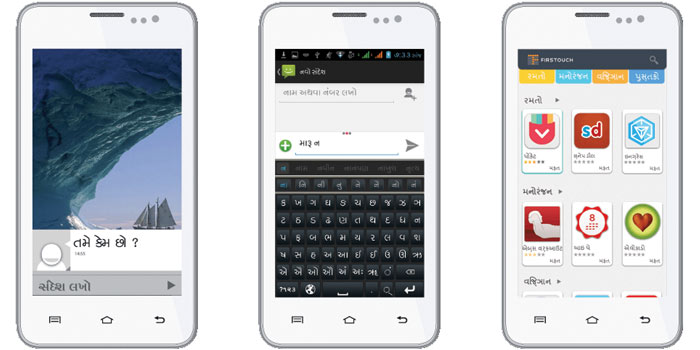 MoFirst’s Android smartphones with Marathi and Hindi support were supposed to hit the market in this month itself, but the schedule has apparently been moved to July. Co-founder and CEO, Rakesh Deshmukh, says that handsets accommodating all of India’s regional languages will be released by March 2015, notes IBNLive who dug up this story through PTI.

The main selling point of the regional-language based phones is inbuilt technology which lets you translate text to and from English with simple swipe gestures. They integrate a patented Matra predictive text software in addition to the special keyboard containing 48 virtual buttons for the English as well as Indian language alphabets.

MoFirst is scheduled to let out 10 different versions of the Firstouch regional smartphones priced anything between Rs 3500 and Rs 12500. We haven’t had a chance to give the first of the brand’s devices a spin, but if it actually works out according to plan, then it’s quite revolutionary in terms of convenience and usefulness.

Imagine not having to learn a particular language and still being able to communicate with another person who only knows that tongue, by simple swipes on your handset. The company will launch its Bengali, Tamil and Telugu language Firstouch variants by September 2014.

MoFirst smartphones supporting Malayalam and Kannada will reach shelves by November 2014 and devices accommodating all the rest of the Indian regional languages will be released by March 2015.