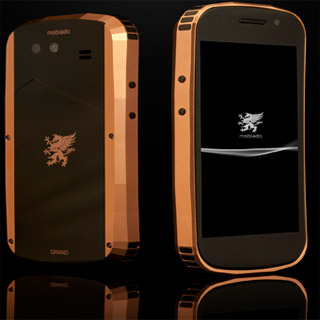 Two new phones by Mobiado called the Grand Touch and GCB were recently unveiled. The company has come up with touchscreen phones for the first time and has given them a royal look which has been inspired by the sharp edges of gems.

With an elegant appearance, these phones possess flat surfaces, circular buttons and distinctive straight lines which reflect light. The Grand Touch has a CNC machined body crafted from solid aircraft aluminum and anodized to produce a hard surface for daily use. The GCB’s gold plated structure is also CNC machined from solid brass. This CNC mechanism enables sharp lines instead of curves in the devices whose upper parts are embellished with the designer, Peter Bonac’s signature.

Both handsets equip 5MP cameras with LED flash and 4-inch S-LCD capacitive touchscreens of 480 x 800 pixels. They are GPRS, Edge, Wi-Fi, Bluetooth and EDR enabled. The phones are accompanied by 3.5mm audio jacks and include features like accelerometer sensor for UI auto-rotate, multi-touch input method, proximity sensor for auto turn-off and a 3-axis gyro sensor.

The Grand Touch and Grand Touch GCB mobile phones are capable of operating in regions of North America, Europe, Africa, Asia- Pacific and South America where GSM 850/900/1800/1900 networks are available. Completing their luxurious look and feel are their frames which are inlayed with black painted sapphire crystal, their backs that embed two pieces of sapphire crystal each and their battery covers constructed from a single unit of sapphire crystal with a novel sliding mechanism.

Details regarding the price and availability of the Grand Touch and GCB phone shave not been disclosed.