They call it the laptop-replacement, the new Microsoft Surface Pro 3 which was announced to be priced at $799 onwards at its launch this week in New York City. The Surface Pro 3 tablet is a vast improvement from its predecessor and Microsoft is ambitious enough to hint that it’s a MacBook Air killer.

The Microsoft Surface Pro 3 comes with a higher resolution and larger screen as well as a stylus as compared to the exiting model’s 1920 x 1080p, 10.2-inch display and lack of a digitizer pen. Users can also look forward to almost 2 extra hours of battery life on the new tablet and a choice of 4th generation Intel Core i7, i5 or i3 processors. 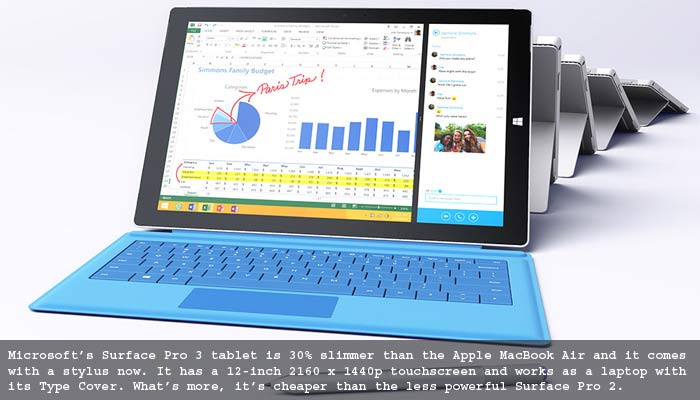 The Surface Pro will arrive in the US and Canada on June 20 and roll out to other countries in August. It will land with Windows 8.1 Pro onboard and a choice of 4GB RAM or 8GB RAM, depending on whether you pick 64G/128GB storage or 256GB/512GB memory, respectively. One thing that left us disappointed was the Surface Mini which was a non-show at the NYC event, though there are indications of its launch later this year.

Here are the main specifications of the Surface Pro 3 tablet:

You can follow this official link for more on the Microsoft Surface Pro 3 availability details in your country, if you please. And here’s the pre-order page for this notebook-replacement from Redmond.