News about Microsoft having taken over Nokia’s devices and services business has gone stale by now, but you’d be pleased to know that the company is all set to unveil the first Lumia smartphone that won’t bear the branding of the Finnish company. November 11 can be marked as the date on which this will happen, but there are very few clues regarding what kind of a device we’re in for.

Back in September last year, Microsoft initiated a deal to purchase the hardware business belonging to Nokia for a mind-numbing sum of $7.17 billion. This transaction was closed in April this year, and it’s since then that the Windows-maker has been planning to make changes in the branding of Nokia’s devices.

It was announced recently that all smartphones coming from the company will henceforth be called Microsoft Lumia handsets, while the feature phones will still maintain the Nokia branding. November 11 is being teased right now as the date on which the first phone with the said branding will appear.

While nothing official about this handset is known so far, we had recently heard about a model named Lumia RM-1090 (via GSM Arena) which had passed through China’s TENAA with quite humble specs. This handset included a 5-inch qHD display and dual SIM slots. It could mean that it’s targeted towards developing markets. 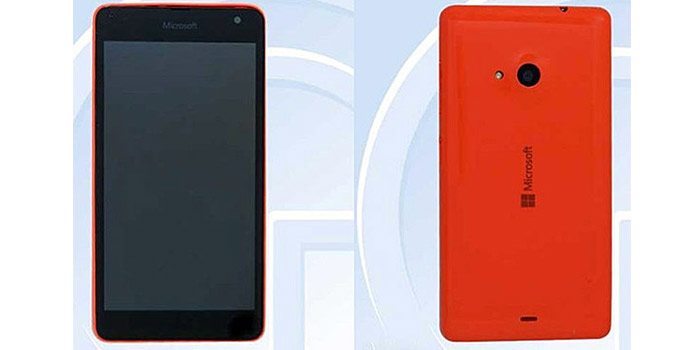 Most importantly though, images of this smartphone show the Microsoft logo placed on both its front as well as rear surfaces. We’ll have to wait until Tuesday to take a proper look at the new Microsoft Lumia device, so stay tuned until then if you’re interested in knowing what kind of a direction the company will be taking next.