Now that Microsoft Office Online apps have been introduced to Skype for chatting with a bunch of participants while collaborating over documents, you’re probably wondering why it wasn’t there in the first place. We mean, those using similar productivity tools within Google Drive have been able to do this for so long.

Well, it’s better late that never and as many have been saying, Microsoft has started making some crucial moves with Satya Nadella at the helm. Take Office for iPad, for example, if you please. You could also argue about Skype group chats within the company’s web-based applications being a small feature which was bound to arrive at some point of time anyway. 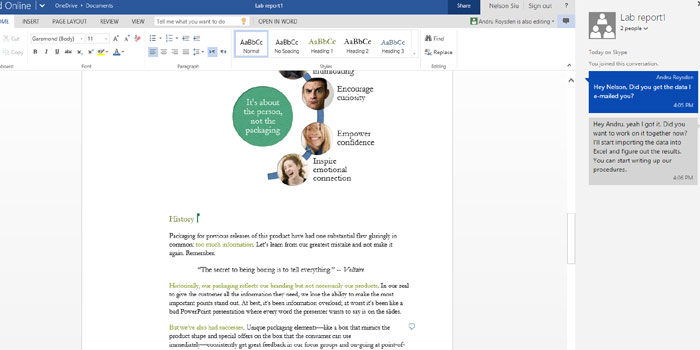 The point is that you now have Skpe chats within Microsoft Office Online apps making it easier for people to work together over documents. It will start hitting Word and Powerpoint within the following weeks. There’s no news about the feature reaching OneNote or Excel any time in the near future, in the official blog post announcing the development.

Microsoft has been focusing on cross-platform services and the cloud with increasing fervor ever since Steve Ballmer gave up his chair to Nadella. The Skype addition adds more functionality to the online Office apps. With it, users may carry on a chat with the same people with whom they were collaborating even after exiting the document in question.

This can be done via Skype for desktop or mobile. It’s not very clear right now, but it looks there will be some kind of notification system to tell users when their team members are working on the project, so that they can jump in if they wish to. The chat option will be made available via a special button in the upper right hand corner of the open application.

Have you started seeing the Skype group chatting button within Microsoft Office Online apps yet?