Now that Microsoft has consumed Nokia’s devices business, it has decided to launch a brand store in India through partnership with Amazon. The Redmond giant has been selling its products and services in the country online for many years, but the new store will basically allow customers to get their hands on a wide range of hardware offered by the software company.

Microsoft is yet to officially announce the deal with Amazon for the brand store, but Microsoft-news is reporting that the space is already live and has a decent roster of products listed. Basically, you’ll be able to purchase almost everything that the company is selling including Windows 8.1, its office products and Xbox consoles as well as accessories and games. 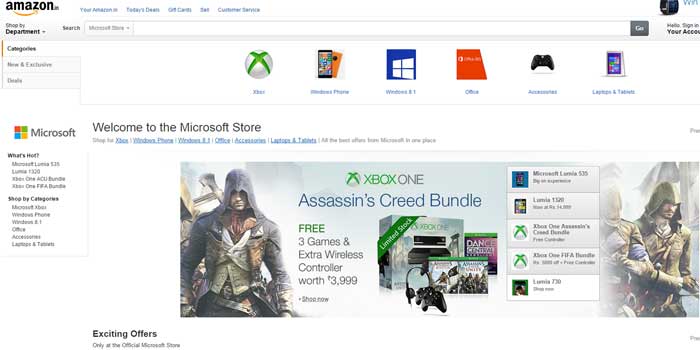 Of course, WP8.1 devices (including the Android powered Nokia X2 and a couple of feature phones) have also made the cut where some of the new Lumias are up for grabs. It’s likely that Microsoft will discontinue the Nokia India Times store which has been the official destination for acquiring devices in India.

The company is also selling laptops and tablets from its OEM partners as well as computer accessories, but not its own Surface devices. Based on this, we’re likely to see smartphones from other manufacturers get listed in the future. You’ll also find a deals section for exclusive offers on products.

Currently, there are a couple of handsets and Xbox One bundles up for grabs. In recent news, the company revealed that it plans to initiate a buy-back offer for its smartphones in the country. Customers will be given a good discount on newer released in exchange for their old Lumias. You can read all of the details on this offer over at this link.

Be sure to check out the Microsoft brand store on Amazon through this link.