Seeing these kind of headlines on April 1 has become a routine for you by now, which is why you will have already figured out that the MS-DOS Mobile announcement from Microsoft for its Lumia smartphones is just an April Fools’ Day joke. But it’s a fun one anyway, since it has at least managed to make us nostalgic about the golden days of black screens and white commands.

There’s one very interesting thing about this MS-DOS Mobile prank though. Microsoft has actually released a Windows Phone app that lets you use your Windows Phone handset the way you ran MS-DOS computers. It’s with such elaborateness that the company has decided to differentiate itself from other manufacturers who are performing the same old expected April Fools’ gags. 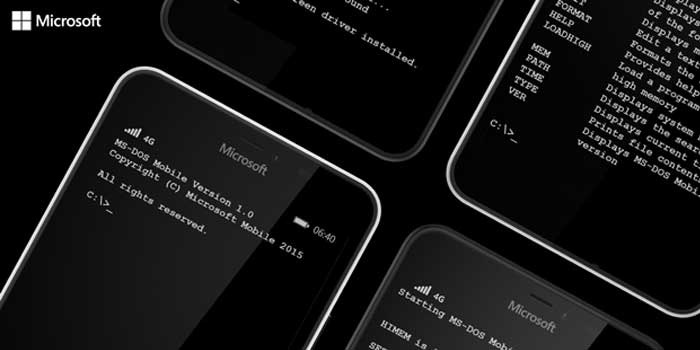 Take Samsung for example; which is showing off the Galaxy BLADE edge smartphone boasting of such sharp edges that it can be used as a chef’s knife. Motorola made things a tad more believable by outing a video showcasing a selfie stick that will be made available in wood and leather builds.

Google has as usual taken April Fools’ Day very seriously by introducing a set of three gags. One among them is quite simple; you just need to type com.google in your address bar and see the magic. The second prank by the search giant is game that actually lets you play Pac-Man on Google Maps by clicking on an icon on the bottom-left of the screen. And then there’s Chrome Selfie, a feature on the browser’s app that lets you share your emotions based on the content you’re reading.

But Microsoft’s MS-DOS Mobile April Fools’ prank really does stand out for its innovativeness. Go check out the app if you’re a Windows Phone user.