As cheap as a smartphone with a price tag of Rs 6999 attached to it, the Micromax Canvas Tab P480 is the latest voice calling tablet to hit the Indian market. The device hides two SIM card slots under the hood and it connects to 3G networks. Although the Canvas Tab P480 lands with KitKat v4.4 aboard, Micromax pinky swears that it will be upgraded to Android Lollipop 5.0 over the air.

The Micromax Canvas Tab P480 is supposed to play successor to the P480 with its improved performance, handy features and ‘multiple content offers’, the last term standing for pre-installed apps. There’s a Quicklook option for getting your news feed and social media updates in one single place, while MAd is basically an application designed for people who like watching advertisements and would love to get rewarded for doing so. We’ve spoken about the video platform before when the MAd A94 was launched. 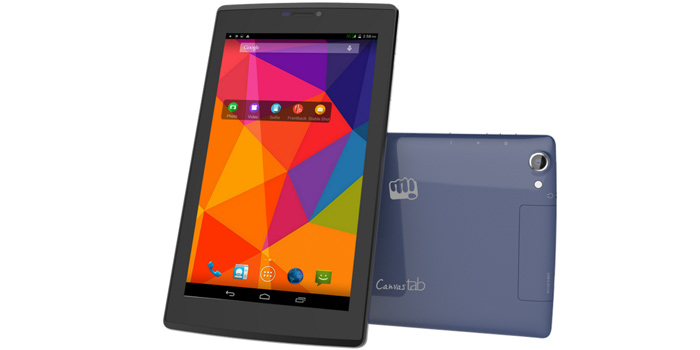 Tie-ups with various developers mean users will also find apps like Saavn, Hello TV and Truecaller pre-loaded onto this latest release. The Micromax Canvas Tab P480 is the third tablet in Micromax’s new portfolio of Canvas Tab devices which includes the the P470 and the P666. Some the its main specs cover a 5MP AF rear camera with LED flash, a 7-inch touchscreen, a quad core chipset, 1GB RAM and voice calling.

The Micromax Canvas Tab P480 is scheduled to be launched within the next few days. It will be available in two color options of dark blue and white.