Following the Canvas Knight flagship, the Canvas Doodle 3 smartphone is the second from the Indian OEM to receive and update to Android 4.4.2 KitKat. As usual, the new firmware is being seeded to the handset over the air.

The availability of Android 4.4.2 KitKat update for the Micromax Canvas Doodle 3 was announced by the company on its official Facebook account. No changelog has been provided for the update, but we know that it will weigh around 387.85MB in size. You can expect various bug fixes and probably some new features. 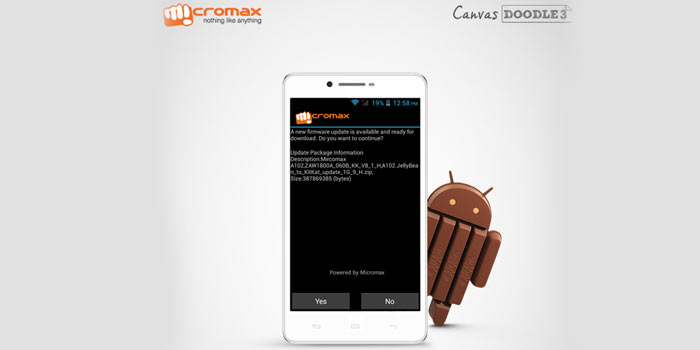 Micromax notes that you’ll have to reboot your smartphone in order to receive a notification for the update. The Doodle 3 was launched back in April and like many other phones, it delivered Android 4.2.2 Jelly Bean out of the box.

With 4.4 KitKat, users will be treated to numerous enhancements such as better memory optimization, wireless printing support and improved battery life amongst others. The handset is a large one offering a 6-inch display for Rs 8500 and it packs entry-level components such as a dual core processor, 512MB of RAM and 4GB of storage with microSD expandability.

If you still haven’t received the Android 4.4.2 KitKat update on your Micromax Canvas Doodle 3 smartphone, be sure to follow the aforementioned step. You could also manually search for the new firmware though the Software upgrade option in the Settings menu under the About phone tab.