Home Accessories A micro phone lens which turns your cellphone into a handheld microscope...

Macro mode can only do so much for your handset’s camera, but here’s a micro phone lens which converts your device into a handheld microscope of sorts. Picture contact lens for your eyes and you’ve kind of got it right. This is not the first time we’re seeing the invention which is credited to University of Washington’s mechanical engineering alumnus, Thomas Larson.

Last year, Larson opened a successful Kickstarter campaign to produce and sell a micro phone lens which is capable of offering up to 15 times magnification. The new one that is being proposed by him is expected to deliver more than that with ten times as much power. The lens is being created to render 150 times magnification, putting it in the same class as standard microscopes which magnify between 50 and 400 times.

The lens won’t be a permanent fixture on your smartphone. It sticks to the camera without requiring any kind of glue and can be stored in a provided case when you don’t need it. This little novelty is compatible with all sorts of handsets, though it’s preferable that you have a device carrying a 5MP or higher snapper.

The invention was born out of a need for a miniaturized lens which could be used with a cell phone as a microscope. Present offerings are bulky or call for permanent adhesives. Interested in ordering the micro phone lens through Kickstarter? Follow this link to the pre-booking page. It costs $29 or higher depending on the bundle you’re going for. 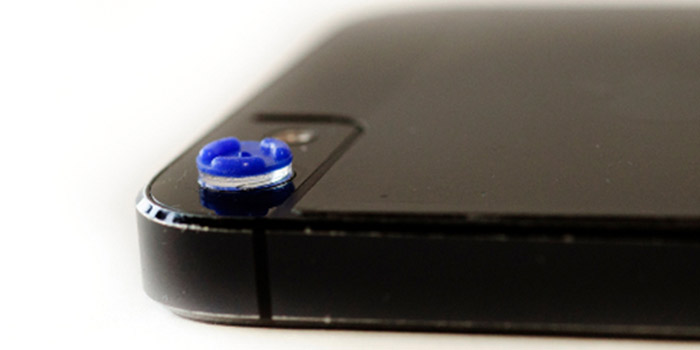 Shipping begins in July 2014 and customers living outside the US will have to shell out $15 extra towards delivery charges.