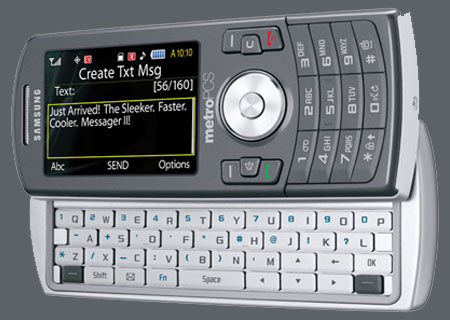 MetroPCS and Cricket Wireless have together brought to light the new Samsung SCH-R560 Messager II slider phone. MobileBurn reveals that the phone is an updated version of the Samsung Messager which was released earlier this year.

The device incorporates the sliding full-QWERTY keyboard along with a 2.0 megapixel camera. Users have easy access to text messages and social networks. They can click images, record and store loads of content in the microSD memory card of the phone. Bluetooth with A2DP stereo support and EV-DO data connectivity for speedy web browsing is also provided.

It is 4.33 ounces in weight and 4.49″x1.9″x.07″ in size. The standard battery provides a talk time of up to 4 hours and a standby time of 300 hours. Nearly 64-note polyphonic ring tones are available to users. Additionally, it offers a calendar, Worldtime option and speakerphone together with other features.

The Samsung SCH-R560 Messager II is offered for $149 from MetroPCS, and for $199 from Cricket Wireless.