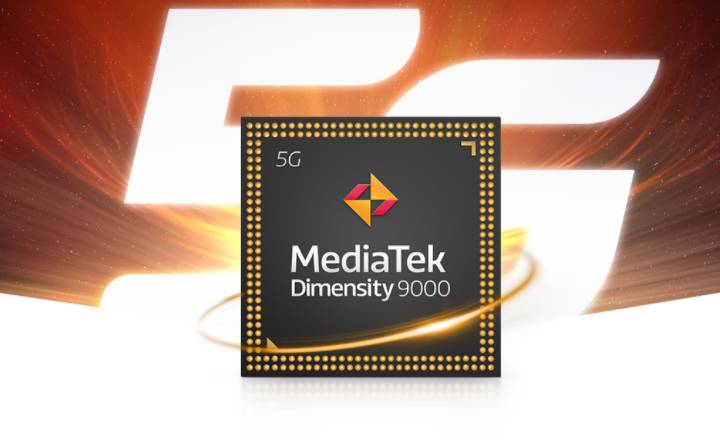 MediaTek has decided to intensity its rivalry with Qualcomm by unveiling its latest SoC, called the Dimensity 9000. The chipset looks set to challenge upcoming Snapdragon chips with its ultra-high-end hardware that includes ARM’s new v9 architecture as well as its new core designs.

The MediaTek Dimensity 9000 is geared towards 2022 flagships and Vivo, Realme, Xiaomi, Oppo, Samsung, Motorola, and OnePlus are reportedly among the first manufacturers who will be using the chip. It comes with an integrated 5G modem, of course.

Built on TSMC’s 4nm process, the Dimensity 9000 employs ARM’s new v9 architecture and is also the first to have its CPU come with ARM’s new core designs. These include a single Cortex-X2 performance core clocked at 3.05GHz, a trio of Cortex-A710 cores clocked at 2.85GHz, and four Cortex-A510 efficiency cores running at 1.8GHz.

As for the GPU onboard this MediaTek SoC, it’s a 10-core ARM Mali-G710 unit. Unsurprisingly, an APU is also part of the construction. It grabs a total of six cores that together offer four times the performance and power efficiency of its previous generation.

An all-new ISP goes into this MediaTek chipset as well. It’s an 18-bit Imagiq Gen 7 unit that happens to be the world’s first to be capable of snapping 320MP images. The Dimensity 9000 is also the first to support Bluetooth 5.3.

As far as 5G does, this new MediaTek offering delivers support for 3GPP’s Release 16 specification. Despite this, however, it cannot support mmWave, with only sub-6GHz bands catered to.

The launch of the new MediaTek Dimensity 9000 has come right at the time when Qualcomm is gearing up to unveil its next-gen Snapdragon chipset. That launch will likely take place at the Snapdragon Tech Summit on November 30.