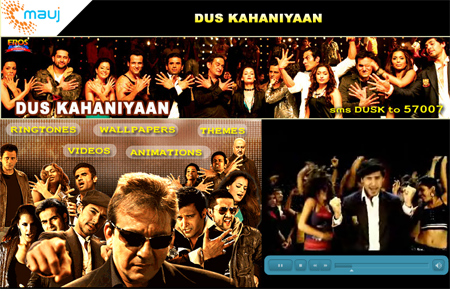 Mauj Mobile, a wireless solution provider has joined hands with Eros Multimedia to make the content of the new ‘Dus Kahaniyaan’ film for the mobile phone platform.

Dus Kahaniyaan, which is produced under White Feather Films banner, is a unique concept of ten short stories put together in one film. This is the first time in India that this type of a film has been conceptualized.

Mauj is offering exciting mobile content for the film, including ringtones, themes and animation based for striking visuals, songs, and dialogues from the movie.

Special features of Dus Kahaniyaan include mobile wallpapers such as the dialogues of the 25 actors of the star cast, video animations and video ringtones of the movie’s sound track.

“Mauj is known for the quality content and innovative products that it provides to its consumers. With this tie-up with Dus Kahaniyaan, we have attempted to pick up the best from the 10 short films along with 25 film stars and package it beautifully for the mobile screens of Hindi movie enthusiasts,” commented Manoj Dawane, CEO, People Infocom (Mauj),

He continued, “Our association with Eros has been extremely encouraging, giving us the opportunity to work with banners like White Feather Films.”

Users who wish to download tones, wallpapers, animation and themes can SMS ‘DUSK’ and send it to 57007. The content will be charged accordingly:

The Mauj has also created a Special New Year Celebrity Greetings designed on the members of the film’s starcast.