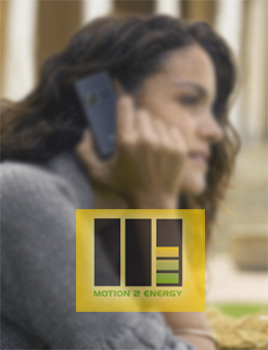 M2E which offers solution for handsets and large-scale power generation has introduced a mobile phone which can work on kinetic energy which can be converted to electrical energy.

M2E Power is focusing on the mobile power needs of the military so as of now it is not available commercially.

M2E Power offers mobile solutions such as a micro-generator combined with traditional battery storage to create a system that captures the kinetic energy of normal everyday motions like human or vehicle, to generate enough electricity to sufficiently power mobile devices.

Through a normal amount of motion, many of these products will not require to be plugged in for recharging or will experience extended run-time before recharging.

M2E is designed to dramatically lower the 10-30 pound burden that soldiers often carry to power the 500+ mobile battery-powered military devices currently in use, and to help meet consumer demand for both clean power and greater device mobility.

According to David Rowe, President of M2E Power, “Our first goal is to address the mobile power crisis our military is facing.”

He further continued, “M2E is a solution that provides on-demand power so men and women in uniform can reduce the number of batteries they have to carry with them. Along with addressing the mobile power need, M2E is more environmentally friendly than traditional batteries.”

M2E Power leverages the well-proven Faraday Principle, which goes like this: ‘energy produced via motion of a magnet through a wire coil, however with changes in the magnetic architecture that has broad applicability to numerous sizes of motor generators.